We operate a high end showroom.  And yes, we sell bidets.  I’ve known about them since I first began selling plumbing fixtures decades ago, but I hadn’t ever been a fan.  This was not out of experience in using one, but rather, from lack of knowledge.

For years we touted the advantages of owning a bidet.  Cleanliness and hygiene were our selling points.  But we sold very few because the bathroom required additional space for the separate bidet fixture.  Only those who had either traveled through Europe or lived abroad wanted one.  In Europe they’re very common.  But Americans were not willing to dedicate space for them, and architects who designed new home bathrooms pretended that they didn’t exist.

It wasn’t until I talked to a European once about this very issue, that I truly got a vivid picture of the benefits.  He said to me, “I’ll rub mud on your arm, and I’d like you to clean it off with a dry paper towel or toilet paper only.  Is 100% of the mud gone, or do you want to wet a rag or towel to finish removing the mud?”  The answer is obvious, and the analogy pretty clear.

Then Toto (a Japanese company) came up with a creative solution to the problem of adding a separate bidet fixture to the bathroom.  They created a bidet toilet seat as a retrograde to fit your existing toilet.  Their invention took the place of the existing toilet seat, and used the toilet supply water to operate.  The one small issue to solve was getting an electrical outlet near the toilet to make things work.

Benefits?  Lots of them.  The seat has a built-in warming element to help with cold winter temps.  How comforting and relaxing this is...  Toto came up with a remote control that can be wall mounted if preferred, with easily read icons for cleansing, using a soft or hard spray by a sliding scale, with front or rear cleansing spray direction.  The water nozzle retracts so it’s not visible until it’s called upon for use.  After use, there’s a button for a drying fan.  You can even control the air temperature, and run a vent fan afterwards that goes through a charcoal filter. How much more could you ask for in a hygienic device?  And it takes no extra room, since it fits on your existing toilet.

So...  I took one home to try it, and I’ll admit I don’t use it every time the occasion arises.  But I do use it regularly, and I’m now a fan.  There just isn’t a valid objection to having one anymore, other than that they’re not free.

"Sean W. was fantastic. He did a plumbing inspection for us and found some items we were aware of, but also some we needed to pay attention to...Very professional, helpful, and courteous! And he handled my rambunctious pooches perfectly."

"I had a check-up on my furnace today by Bob and Christian...they went over the furnace, changed the filter, and disposed of the old one for me. I've used Master Plumbing, Heating and Cooling at least 6 times now for all the services they provide, and I've always had good service."

"I have used Master Plumbing and Heating for multiple projects and I have never been disappointed in their workmanship, customer service or the service tech's. I highly recommend them. I will continue to use them for all of our needs."

"What great service, I was out of heat all night, and was up till 1am in the morning fighting with my heating unit to figure out the problem...big thanks to Brett and Emmanuel!! and of course Master Plumbing, Heating and Cooling!"

"Very professional - our service was delayed due to other emergencies, but they kept in constant contact with me so that I knew exactly what was going on and when I could expect them to be there. Jason was right on time and did a great job. I will continue to call them if I ever need service again! Thank you!!"

"Speedy service...we had an emergency on the weekend. Great rates for being a weekend call. Thankfully easy fix but it was still causing us a mess/headache. Will definitely use them again."

"Had Brian T. over to add a shower to my existing tub, and he was wonderful! Jessica in scheduling is always a pleasure to work with as well. Glad to have found a great plumbing company in my new city!"

"Our shower was leaking into the basement, and we had to shut off the main water supply to the house. I contacted Master Plumbing in the morning, and they had a tech out to our house that afternoon. John C. was thorough with his work and took the time to explain to me what was broken and how he would repair it. I was very impressed and highly recommend his work!"

Your time is valuable! Your technician will arrive promptly at your door ready to get to work.

Rest easy knowing our Master Plumbing, Heating, & Cooling pros have your best interests in mind. We will only recommend services you need!

We keep up with our continually changing industry so you enjoy the best and safest service options possible. 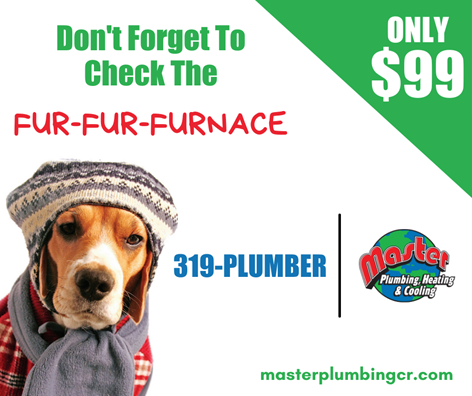